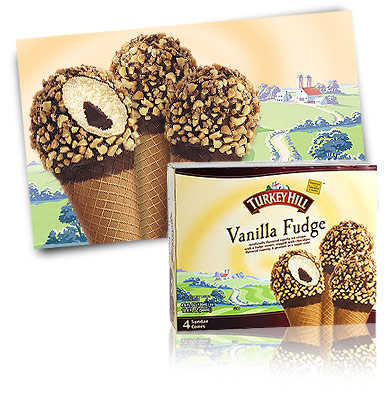 *The % Daily Value tells you how much a nutrient in a serving of food contributes to a daily diet. 2,000 calories a day is used for general nutrition advice.

Explore all the great Sundae Cones flavors from Turkey Hill

Thick sweetener made from corn used to add sweetness to foods and drinks.

The dairy liquid that remains after the making of cheese. Used in foods to add solids.

H2O. The basic ingredient in the cells of most living organisms.

A natural flavor derived from vanilla beans. Used as a flavoring in many foods and drinks.

Milk with sugar added and thickened through evaporation. Used as an ingredient in food and drinks.

A sweetener made from sugar cane or sugar beets. Used to add flavor to food and drinks.

A low calorie sugar substitute. Derived from sugar. Used to add flavor without adding a large amount of calories.

Whole wheat that is ground and lightened with a whitening agent that helps it last longer. Used in many baked goods that can be added to some ice cream as part of a flavor profile.

Dairy product made from churning cream into a solid. Used as an ingredient in many baked goods that may be used as inclusions in ice cream as part of a flavor profile.

The sodium salt of citric acid used in foods and drinks as a flavor-enhancer or preservative.

Sodium chloride. A common household seasoning used to enhance flavor in some products.

A natural or artificial brown color used to enhance the color of food and drinks.

A thickening agent used in food and drinks that is made from a red, edible seaweed.

A plant based thickening agent made from the cell walls of plants. Used to thicken and stabilize the ice cream.

A natural thickening agent made from the cell walls of plants.

A man-made thickening agent used to enhance the texture of some foods and drinks and to make oils stay blended with water based products. Made from sorbitol.

Cocoa processed with a neutralizing compound used to darken and reduce the bitterness of the cocoa. Also referred to as "Dutched" chocolate. Used as the flavor for some chocolate ice cream products.

A chocolate powder made from roasted  and ground cacao seeds. Used as an ingredient in some chocolate flavored products.

A chocolate powder made from roasted  and ground cacao seeds that is treated with alkali to reduce bitterness. Used as a ingredient in some chocolate flavored products.

A saturated oil derived from coconuts used in food production as a fat.

A semi-solid version of palm fruit seeds or kernels used to enhance shelf life and texture of a food.

Naturally occurring and synthetically produced ingredients used to enhance or create a flavor.

Ingredients used to keep oils and water from separating.

A texture and flavor enhancer derived from carbohydrates such as corn, potatoes, or rice.

A fiber from the seed of the guar plant used to thicken and stabilize foods.

The thick liquid containing the fats in milk.

Also known as carob bean gum. A natural, plant-based gum extracted from the seeds of the Carob tree. Added to food as a thickener.

The edible vegetable oil from the fruit of the oil palms.

A legume crop grown mainly for its edible seeds.

Fat free milk where the cream has been removed.

We send our friends emails with contests, product announcements, and other fun stuff. We won't share your email address with anyone else. Promise.

Trio'politan is three ice cream flavors in each container.